I couldn't help myself: 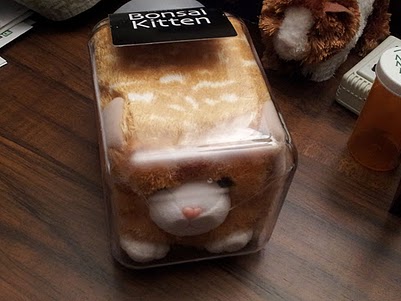 I found this for sale at Think Geek. Back in December 2000, I was the Network Manager at MIT when the bonsaikitten.com website appeared, hosted at MIT. You can read more about the Bonsai Kitten website in the Wikipedia. The actual author of the site is not public. However I was the contact for MIT, so I received the brunt of the complaints about the site.

Of course the site was a total joke, but there were more then a few animal lovers who didn't quite see it that way. The MSPCA, the Humane Society of the United States and various animal rights groups were also less then pleased. At first we resisted taking the site down, as MIT strongly supports the First Amendment rights of its community members. However there was some concern that the site might be in violation of the Massachusetts statutes dealing with incitement of animal cruelty. Based on legal advice, we requested that the author remove it from our network.

It shortly (as in hours) appeared on a commercial hosting site. Of course, most people didn't know that it was no longer at MIT, so we continued to receive complaints, in various languages, for years!